Masi teenager Fundile Feke (15) has been chosen – after more than five years of being a volunteer artist and training hard every weekend – to join full time from 2016 the internationally recognized Cape Town based ZipZap Circus School. 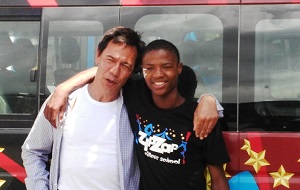 Fundi has grown up, since the age of five at the HOKISA Children’s Home in Masiphumelele, and has been a learner at Bay Primary School. His special HOKISA father (also HOKISA board member and Clovelly resident) Perry Tsang tutored him over the years.
Both are so proud of such an achievement of a potential international circus career.